Will to Open DRUMscene Live - Sydney 2015

Twelve-year-old drummer extraordinaire Will Harpur will open the DRUMscene Live - Sydney 2015 show on Sunday 24 May 2015 from 2:30 PM with a ten-minute drum solo. He'll share the bill that day with some of the most esteemed and original drummers alive today: Jojo Mayer, Todd Sucherman, Jason Heerah, and Dom Famularo. Prior to commencing his drumset studies with me in 2014, Will was initially taught by his father Mal before spending a few years with Gordon Rytmeister.

I asked Frank Corniola, managing director of Drumtek, DRUMscene, Musictek and Australia's Ultimate Drummers Weekend for his thoughts on Will and his participation in the DRUMscene Live show, and here's what he had to say:

"Since 1993 my team at Drumtek and I have proudly presented 'Australia’s Best Up & Coming Drummer’ competition in three categories: junior, intermediate and open. During this 22-year journey I have been very privileged to meet and hear hundreds of the most talented and dedicated young Australian drummers coming through the ranks. So many of the winners and runner ups have gone on to do big things in the global music industry.

"Will Harpur is one of these outstanding young drummers that made an enormous impact on all the judges during the 2013 competitions. As a result he was awarded first place in the junior division. When I was planning DRUMscene Live - Sydney, I invited Will to be part of the 'All Star' international line up to further highlight his great talent. Congrats Will on your wonderful achievement and we look forward to hearing you perform at DRUMscene Live".

Dom Famularo, drumming's global ambassador, took some time out of his current 14-day, 11-city tour of China to write the following about Will, and about DRUMscene:

"I had the chance to hear Will perform during one of my many visits to Australia for AUDW. Will won the up and coming and he for sure is...up and coming soon! Will is a very musical and talented musician. He really impressed me. He truly is one of the next generation of drum leaders.

"DrumScene Live is a powerful show that inspires people, entertains them and motivates the deep musician in all of us. DrumScene Live brings the magazine to life! Having Will join us will add a level of enthusiasm that will be contagious to all who attend. I look forward to hearing Will and seeing everyone there!!!"

The following is an interview I conducted with Will in the lead up to DRUMscene Live - Sydney 2015. 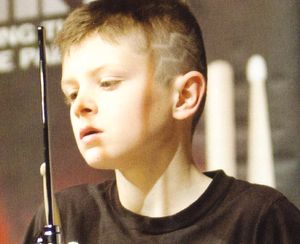 DG: Will, you’ll be performing on the bill for the DRUMscene Live Australian Tour in Sydney and opening for some of the biggest names in drumming - Jojo Mayer, Todd Sucherman, Jason Heerah & Dom Famularo. How do you feel about this?
WH: I feel very happy and I'm excited to play the opening of the DRUMscene Live Australian Tour. I’m grateful to be able to open the show for Jojo Mayer, Dom Famularo, Todd Sucherman and Jason Heerah. I’m ready to have a chat with them and have a look at some of their great drumming ideas and techniques. And I’m hoping to take away some new ideas from those great drummers. And I’m working as hard as I possibly can to impress them and have a fun gig.

DG: How did you start as a drummer?
WH: When I was about five years old my dad would be drumming and doing gigs all the time, and I would go and watch him and his band play and rehearse. I thought it would be fun to start drumming, and so my dad started teaching me in the house. I would come home from school and watch the Brian Setzer Orchestra every single day for about three months. After that, my dad showed me Buddy Rich, and I would listen to his drumming all the time. Dad would teach me jazz and swing, and a few rock beats. One year later I was playing with the senior band in primary school at the age of seven.

DG: What have you been working on lately?
WH: I'm trying to challenge myself as I auditioned for the intermediate section of Australia’s Best Up and Coming Drummer Competition, which is held as part of the Australian Ultimate Drummers' Weekend. So lately I have been working on my solo for that in case I become a finalist. But Frank [Corniola] called and asked me to play at the DRUMscene Live - Sydney, and so I've also been working hard on some solo sections for that including Afro-Cuban, samba, songo, jazz, and some Tony Royster Jr. stuff.

DG: Which recordings do you like to listen to for inspiration?
WH: The main recordings that have inspired me include Virgil Donati, Tony Royster Jr., Jojo Mayer, Dom Famularo, Daniel Glass, Steve Smith and the Foo Fighters. I have listened to all of these musicians. They have inspired me to commit to the drumset, and they will continue to do so.

DG: What are some of the highlights you’ve enjoyed as a performer so far?
WH: Some highlights in my drumming career were when I got selected in the top three to play a three-minute solo in Melbourne for the junior division of Australia’s Best Up and Coming Drummer Competition 2013. I auditioned with a written song, a written marching piece, a written reading piece as well as an open three-minute open solo. I felt great about getting in at the age of ten as I had placed in the top ten the year before, but missed out on the top three. The main highlight was performing for the judges including Greg Bissonette, Daniel Glass, Dom Famularo, Mark Schulman, Gary France, and Graham Morgan, and of course winning the title of the competition. I was so inspired watching all of those drummers perform over the weekend. The upcoming DRUMscene gig will be a big highlight.

DG: What are you working toward as a drummer in the long term?
WH: In the future I want to be a professional drummer and a full-time drummer, and I want to eventually be sponsored by some of the great drum brands like Sabian, Vic Firth, and DW. I want to win the intermediate division for Australia’s Best Up and Coming Drummer Competition, and I also want to win the open division. I want to play with some of the greats like Tony Royster Jr., Virgil Donati, and many others and I want to tour and see around the world and show many drummers what I can do, either if I'm in a band or if I’m a solo artist. I would like to be a funk/fusion drummer like Virgil Donati and Tony Royster Jr., but I also want to have the jazz/up-beat funk hands like Daniel Glass, Dom Famularo, and Jojo Mayer. My long term goal is to be a professional well-known all round drummer.

DG: Thanks for your time, Will, and all the best for DRUMscene Live - Sydney.
WH: Thanks for being a great teacher and helping me with my ideas!

For more info and to buy tickets, visit: http://www.drumscene.com.au/events/past-events/item/498-drumscene-live-australian-tour-2015

My sincere thanks to Frank Corniola, Dom Famularo, Mal and Will Harpur for their contributions to this article.