Dear friends,
I hope you enjoyed June as much as I did! The fun, however, was not enjoyed without loss. The passing of Melbourne's Allan Browne - drummer, improviser, band leader and poet par excellence - cut deeply through Australia's jazz community.

I didn't know Allan all that well, but the ways that I knew him were particularly formative for me and my career. I first heard him play with late bassist Gary Costello on the sublime Paul Grabowsky trio album 6 x 3. And then my friend - the extraordinarily talented Danny Fischer - introduced me to Allan during my first visit to Melbourne in early 1999. Allan was very gracious, and it was a treat to hear him acoustically with my own ears at the now defunct Bennetts Lane club. My next and only other two encounters with Allan personally were at the Wangaratta Jazz Festival in 2004, and again in 2011. I was a contestant in the National Jazz Awards, and Allan, along with Ted Vining, was a judge.

On both occasions I didn't even expect to get into the top ten as I hadn't been playing the drums much leading up to the contest but I thought it'd be fun to put an entry in to see what happened. Not only was I pleasantly surprised get into the top ten, but I wound up winning third place both times. Unfortunately I didn't get a chance to converse with Allan for too long in 2011 except a brief exchange in a restaurant while Patrice and I were having dinner with John Morrison and Jacki Cooper the night before the contest. I'll always remember the brief interaction I shared with Allan in 2004 though.

At the time, I'd been thinking about ways of exploring some solo drumming ideas, and so I decided to play Thelonious Monk's Round Midnight as an unaccompanied drum solo in the heats that year. It seemed to go over really well, and I got into the finals. I then decided to take a big risk, and to play Monk's Trinkle Tinkle in the finals, but I ended up getting a little tongue-tied in that one, and it was more or less a failure. I felt pretty down about it as I felt like I'd disgraced myself in front of a packed Wangaratta Town Hall, but as I was walking back to the hotel that night, I passed Allan in the street, and all he said to me was, "we loved Round Midnight, mate!" Hearing him say it in his inimitably soft and endearing tone lifted my spirits, and I always keep that statement of his in the forefront of my mind whenever I have to approach any solo settings these days as I believe he knew I needed to hear that on a human level. Thank goodness for the recorded legacy he left us. I can't think of any other drummer whose aesthetic spanned so completely and authentically across the gamut from traditional New Orleans music to contemporary piano trio. He was an inspiration for sure, and my heartfelt condolences go out to his large and close family.

It was a massive month for me, and here's a blow by blow account of what happened...
Dave Goodman Quartet launch at Venue 505 in Sydney
Probably the most exciting event was the launch of my new band – the Dave Goodman Quartet – at Venue 505 in Sydney. Peter Koopman, Matt McMahon and Cameron Undy each played brilliantly on our first gig as a quartet, and I was very happy to finally present some of my new pieces to a live audience. What impresses me most about this combination of players is the uniqueness of the combined sound generated by our interactions. My pieces have not only now been played, but they've taken on new lives in so many exciting and interesting ways that I could not have planned. Our next gig is for the Sydney Improvised Music Association (SIMA) in the Sound Lounge at the Seymour Theatre Centre on Friday 21 August 2015 from 8:30 PM. I do hope you can join us that night, and you can order your tickets by clicking here.

In the meantime, if you'd like to hear some of the highlights from our 505 gig, here's a playlist of tunes on YouTube:


Dave Goodman Drum Clinic in Sydney
I left my drums set up at 505 after my band finished on the Friday night to present a two-hour drum clinic. As well as being primarily educational in nature, I gave away a bunch of door prizes courtesy of Sonor Drums & Bosphorus Cymbals. There was a good turnout, and people were receptive to the ideas of improving coordination and developing soloing repertoire that I covered. Video footage of the clinic will be up on YouTube in the early days of the month. Once it's up, it will be featured on my video page. Joanne Kee also interviewed me about my clinics for the Jazz Australia website. The interview is here: http://jazz.org.au/music-is-infinite/​ 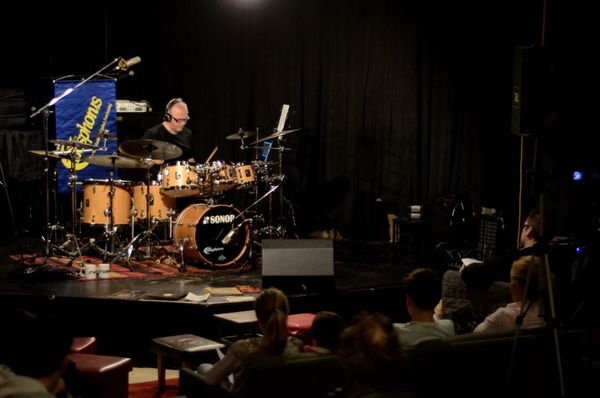 Steve Barry Trio at Wellington Jazz Festival (NZ)
Max Alduca and I joined award-winning pianist Steve Barry to form his trio for a set of music at New Zealand's Wellington Jazz Festival. We played completely acoustically in the beautiful St Peters On Willis church hall. It was my first ever trip to New Zealand, and I loved it. I've never seen so many coffee shops within such close proximity to one another - I was in heaven! 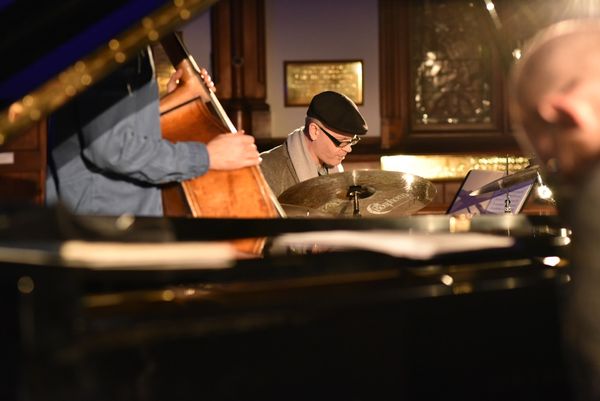 Three Fall album recording sessions
I got off the plane from Wellington here in Sydney, and the next day went into the studio for a week-long series of album recording sessions for a trio I'm in with pianist Nick Southcott and bassist Max Alduca called Three Fall. It is a collaborative trio and each of us contributes our own music. The recording came about because Three Fall was announced as the winner of the 2015 Cranbrook Recording Studio Competition last month. We had a beautiful time recording some new music, and the album will be released and launched in August, so I'll give you some more details then. 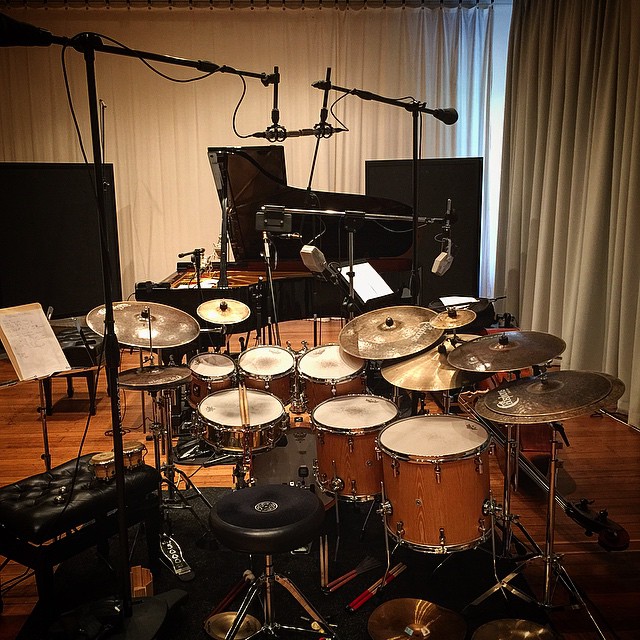 Francesca Prihasti Quartet
Pianist/composer Francesca Prihasti continued her campaign for the launch of her new album Night Trip this time for NIMA in Newcastle. The album was recorded in New York with Ulyses Owens Jr. on drums and Marco Panascia on bass. Francesca writes some of my favourite music to play, and I had a great night playing with Francesca alongside Nic Vardanega on guitar and David Groves on bass. Get Night Trip on iTunes.

PERCUSscene #15
I was interviewed by Gary France for the new edition (#15) of PERCUSscene, which will accompany Issue #81 of DRUMscene. The main thrust of the interview was on the nature of my PhD, and it will appear in the context of other Australian drumming PhDs. Should be an interesting read, and you can order a copy here: http://www.drumscene.com.au/​

Mike Rivett plays Freedman Jazz at Sydney Opera House
You may remember from an earlier newsletter that I was asked by The Music Trust to be a nominator for this year's prestigious Freedman Jazz Fellowship. I'm pleased to announce that one of my nominees, the brilliant Cairns-based saxophonist and composer Mike Rivett, has made it into the finals, and will perform with his band at Sydney Opera House Studio on Monday 20 July along with the other finalists. I'm really looking forward to hearing this concert, and I hope to see you there - big congratulations to Mike!

Lots of great gigs coming up in July. Here's an overview:
I really hope to see you and to play for you at one or a few of these gigs!

Thanks for reading. I'd love to hear from you, so please feel free to leave a comment below. If you'd like to receive these messages and special offers delivered directly to your email inbox, please join my mailing list by visiting http://davegoodman.com.au/signup - you'll also receive a free download copy of my new track 'Entelechies'.