Dear friends,
I hope you enjoyed April and that it was a successfully productive month for you. If you're in Sydney, I hope you weren't adversely affected by the recent storms.

I celebrated the completion of my 38th orbit around the Sun in late April, which means I've now lived in Sydney for 20 years. What a great time it is to be alive, and it's great to be in Sydney. Birthdays sure are interesting times for reflection, but the future is so perennially brimming with new possibility that I find I'm much more interested in looking ahead to finding out as much as I can about what's possible, particularly in music.

As I grow older, I'm starting to find that I'm appreciating more and more of what is, for me, a relatively new aesthetic. It might sound a little cliché, but this aesthetic values more of the beautiful complexity that lies behind just one note, and how this one note relates to all other people, places and events in time, space and velocity. It seems there's a tiny glimpse of infinity behind each musical sound wave, and the more relaxed, clear and balanced one is, the more the infinite has a chance at shining through.

David Perry
​I was saddened to hear of the passing of artist, film maker and jazz enthusiast David Perry in April. I first met David in 1997 as I was featured as a soloist in a film he made called Dr Jazz. It was my first gig in Mike Nock's quartet, and it was my first professional experience performing to cameras. There's a really nice montage in Dr Jazz in which one of my solos dovetails with solos by Toby Hall and John Pochée and I'm very proud to have been a part of that. My sincere condolences go out to David's family.
Nic Vardanega Quartet
I played two very nice gigs this month with guitarist/composer Nic Vardanega and his quartet featuring pianist Steve Barry and bassist David Groves. These gigs served to help Nic launch his beautiful new album Inverno, which features excellent drumming from James "Pug" Waples. We played in Newcastle and then for Jazzgroove in Sydney to warm, receptive crowds. Get Inverno on iTunes.

Canberra with Greg Stott and James Luke
In between Nic's two dates I went to Canberra to play a gig with Canberra guitarist Greg Stott and bassist James Luke at The National Press Club. I've known Greg for a few years now, but this was our first gig together, and I'm going to make sure it's the first of many. It was also great to play with James again as the last time we played was at an informal jam with trombonist Dave Panichi way back in the early 2000s. I couldn't resist having my photo taken next at The Press Club to this classic photo of John Howard in Ian Sinclair's office featuring an unfortunate shadow cast over Howard's head: 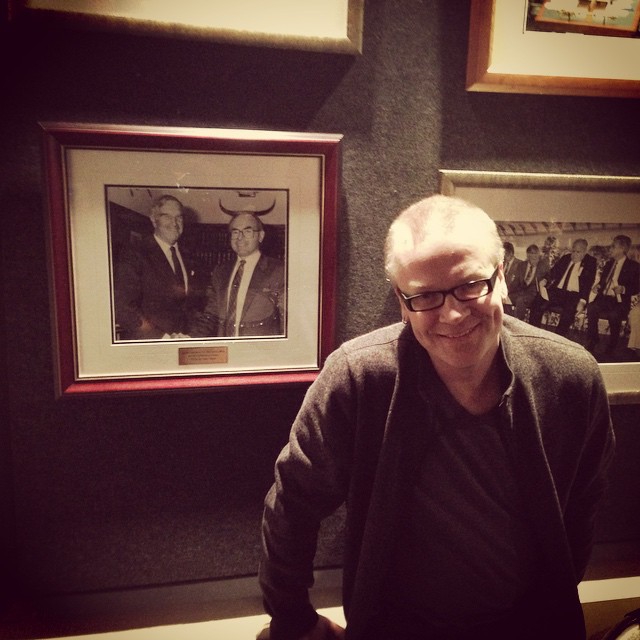 
New Track: Maitreya - Dave Goodman Solo
Whilst in Canberra, I took the opportunity to go once again into Hi Hat Music Studio to record drums on the track Maitreya. Maitreya is a piece I wrote to perform at a Sydney Drummers Initiative drum clinic I did some years back, and I've also performed it at a handful of other clinics and events since. It features the great Matt McMahon playing a Moog solo. Matt is incredible on this one in that, after he got a feel for what the piece was all about, I captured this solo in what was, effectively, the first take.

Maitreya is the first in a series of pieces that I'm composing for performance and recording with my computer under the guise of Dave Goodman Solo, or simply just Dave Goodman. My previously released track Entelechies is also a part of this series - composed later, but recorded earlier. This series is made up of stuff that I perhaps wouldn't play in my quartet, and that I don't place any artistic filters or limits on: total freedom of individual self-expression. The pieces are also typically for performance in drum clinics. When I wrote Maitreya, I had just finished writing my doctoral thesis and I was still under the spell of Tony Williams. There's a track called 'Eris' from his album The Joy of Flying on which he played in duet with Jan Hammer, and so this is my little homage to Tony & Jan. Get Maitreya here. 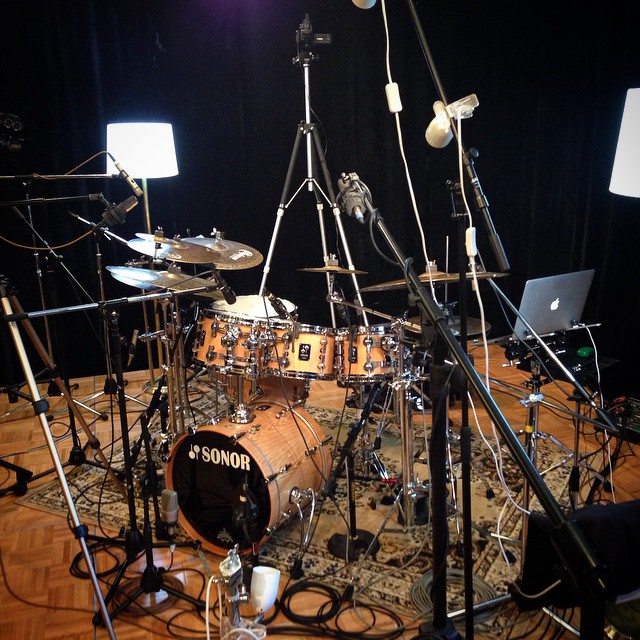 My setup for recording 'Maitreya' in Canberra


Francesca Prihasti
Pianist/composer Francesca Prihasti also launched her new album Night Trip at Jazzgroove in Sydney in April and I was lucky enough to play her music with her again that night. The album was recorded in New York with Ulysses Owens Jr. on drums and Marco Panascia on bass. Francesca writes some of my favourite music to play, and we had a great night at Jazzgroove.

DRUMscene mention
I feel honoured to be mentioned amongst many of my peers and luminaries as one of Australia's great drummers by founder, editor and publisher of Australian drum magazine DRUMscene Frank Corniola in the magazine's current 20th anniversary edition. You can find a copy at the DRUMscene website in case you missed it.
The Music Trust - Freedman Jazz nominations and album reviews
For this month's Music Trust review, I had the pleasure of writing about Brotherhood, a great new album by Perth trio Nick Abbey, Chris Foster & Ben Falle. The review is available to read on my profile page at The Music Trust, and you can get Brotherhood on iTunes.

Warwick Alder's Jazzgnostics
The Jazzgnostics will be playing The Grand Hotel in Newcastle again in May. I love the way this band is evolving, and look forward to playing some more dates later in the year. To me, as well as writing some interesting new pieces, playing great trumpet and being a fount of great stories and jokes, Warwick Alder plays the best ballad in the world.

Aaron Michael Band
Last year, saxophonist Aaron Michael released a live album that I played on. I was only filling in for Paul Derricott that night for the first time, and it turned out to be a great gig that Aaron decided to release the recording of. I'll be playing in Aaron's band again this month at Lazybones Lounge in Marrickville with Matt McMahon on keyboards and Karl Dunnicliff on bass. You can also get the Aaron Michael Band Live album on iTunes.

Trioflight
One trio I really enjoy playing in is Trioflight with pianist Nick Southcott and bassist Max Alduca. We've been together for about 18 months now and we have a handful of gigs under our belt. Nick's new original compositions are absolutely brilliant, and we're looking forward to playing at New Sounds New Words #1 in Glebe on 7th May alongside a collective of poets and other musical artists.

Nic Vardanega Trio
As part of Nic's Featured Artist residency for Jazzgroove over their April/May program, I'll be back at Jazzgroove with Nic again later in the month, but this time in trio format with David Groves on bass once again.
Will Harpur opens DRUMscene Live 2015
Will Harpur, one of my current students, will be opening the DRUMscene Live Australian Tour 2015 - Sydney on 20 May with a ten minute open drum solo. He will then be followed by some of the biggest drumming names in the world today: Jojo Mayer, Todd Sucherman, Jason Heerah and Dom Famularo. Will won Australia's Best Junior Drummer at The Ultimate Drummers' Weekend in Melbourne in 2013. I recently interviewed Will about his drumming. Here's what he had to say along with some commentary from Frank Corniola and Dom Famularo.

Dave Goodman Quartet at Venue 505 in June
I know I'm jumping ahead a month, but I wanted you to know that I will be officially launching my new quartet and repertoire with Peter Koopman on guitar, Matt McMahon on piano, and Cameron Undy on bass at Venue 505 on Friday 19 June in case you're able to come. There'll be more details in next month's newsletter, but I wanted to give you the opportunity to "save the date".
Thanks for reading and, as always, I'd love to hear from you, so please feel free to write to me here and I'll get back to you as soon as I can.
Have a great month!

DG
If you'd like to receive these messages and special offers delivered directly to your email inbox, please join my mailing list by visiting http://davegoodman.com.au/signup - you'll also receive a free download copy of my new track 'Entelechies'.