I hope you're well, and that life is good for you. It's been an unprecedentedly productive and successful month for me, which has made me extremely busy with work. As such, I'm extremely grateful for being able to enjoy the understanding and support of my very loving family, whom I love very much. It was very nice to have my parents staying with us here in Sydney over the weekend, and it was great to just hang with them and relax for a couple of days.

Review
There were many big events and changes this month. Here's an outline of what happened: 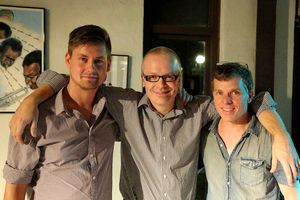 Dave Goodman Quartet
The Dave Goodman Quartet was booked to play its first ever gig for Wollongong Jazz at Wollongong Conservatorium of Music on Friday 13 March 2015. Twenty-four hours beforehand I received a message from my pianist Matt McMahon to say that he was too unwell to make the trip to Wollongong to play the gig. Rather than try and get a 'dep' at the last minute, I decided to go ahead and play the same material as the Dave Goodman Trio that night. Guitarist Peter Koopman and bassist Cameron Undy were simply stunning in the way they brought my new compositions to life for the first time that night. I am very fortunate to be surrounded by some of the world's greatest musicians in my band.

The night was recorded by Peter Nelson from Fine Music FM 102.5. Peter will be broadcasting the occasional piece on his program The Australian Jazz Scene with Susan-Gay Dowling on Mondays from 10:00 PM. If you're not in Sydney, you can stream the show from here: http://www.finemusicfm.com/


In the lead up to the gig, I was also fortunate to enjoy a chat with the silken voice of legendary Graeme Lyndon on his Northside Radio 99.3 FM program Milestones in Music. Tune in to Graeme's show Wednesdays 2:00 - 4:00 PM and visit http://northsideradio.com.au/
The Dave Goodman Quartet will be playing our first gig as the full quartet, therefore officially launching as a band, at a Sydney venue later in the year, but I'll tell you about that in a future edition. 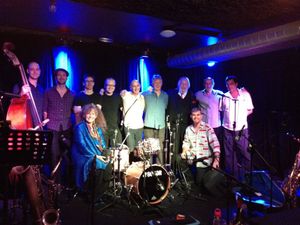 Ten Part Invention
Ten Part Invention - "The Rolls Royce of Australian Jazz" - took to the stage the very next night after my Wollongong gig for our first gig in nearly two and a half years. It was an evening of great music. I want to make special mention here of the great Mr Paul Cutlan who premiered a brand new piece that he'd written especially for the band to play on this night. It's one of the most interesting and intricate pieces I've ever been asked to perform and I'm happy to say that the band did a great job in realising the full splendour of the piece. Paul really is a brilliant musician.

We were also lucky to be joined by the band's founder and former drummer, the pre-eminently distinguished Mr John Pochée AO. Donning a sharp three-piece suit, John showered us with some new rapid-fire witticisms delivered in his inimitable style of repartee as he introduced the band. I haven't laughed so hard in a long time. It was also bassist Karl Dunnicliff's first gig with the band, and we were really lucky to get him.

Tim Draxl in Freeway - The Chet Baker Journey
For the entire following week I enjoyed playing some beautiful swinging music in the style of Chet Baker in the intimate surrounds of the Hayes Theatre in Potts Point under the musical direction of the great Ray Alldridge. This is the third run I've done with Freeway and it was the most fun yet - I didn't touch a stick the whole week as it's strictly a brushes-only show, and I love playing brushes. With Dave Ellis on bass and Shannon Marshall flown in from Brisbane on trumpet, there's nothing more to do other than to enjoy the show. Tim Draxl is an incredible talent and the whole project owes its life to the extraordinary writing talents of Bryce Hallett. I'm looking forward to some more Freeway in the future. One nice review surfaced here in Broadway World.

Drum clinic at Wollongong Con
During the day between my quartet gig and Ten Part Invention, I presented a two-hour drum clinic as part of the Wollongong Jazz series to 23 enthusiastic drummers at Wollongong Conservatorium of Music coordinated by Eric Dunan. I took attendees through a worksheet for developing freedom as a soloist. I also took a number of intriguing questions and played along with a couple of my original compositions.

Here's a link to a video of highlights from the clinic:
Four lucky participants walked away with either a cap or a t-shirt very generously donated for the event by my friends at Bosphorus Cymbals. I think you'll agree that the drums and cymbals sound great in the video, and I'm grateful for my ongoing association with Sonor and Bosphorus. I've been with my ProLite drums now for just over a year, and they are still my favourite drums of all time.

There'll be more events around the country throughout the year, and you'll be the first to find out about those here.

The Music Trust - Freedman Jazz nominations and album reviews
I was invited by The Music Trust to be a nominator for this year's Freedman Jazz Fellowship, which required me to choose two outstanding candidates for the award. I decided to nominate Sydney-based pianist Casey Golden and Cairns-based saxophonist Mike Rivett. They are extremely different musicians and yet equally as brilliant. I couldn't possibly choose between them myself, and so I'm not envious of the task that lies ahead of the judges. If chosen for the short list, Mike and/or Casey will perform at the Freedman Jazz night in Sydney Opera House Studio in July. I will, of course, let you know how they go. You can read my justification for nominating these two brilliant musicians, and also keep abreast of the Freedman developments here: http://musictrust.com.au/freedman/fellowships-in-2014/jazz-nominees/

For this month's Music Trust review, I had a listen to First Intersection by the Daryl Pratt Band. The review is available to read on my profile page at The Music Trust.

What's coming up?
I'll be traveling a little bit to play some of my gigs this month.

Nic Vardanega
I'll be joining guitarist Nic Vardanega's quartet (including the formidable Steve Barry on piano and David Groves on bass) as he launches his new album Inverno. James "Pug" Waples plays drums beautifully on the album, but he unfortunately can't make the launch dates. First stop is Newcastle on Tue 7 April, then we'll play in Sydney for the Jazzgroove Association on Tue 14 April.

Canberra trio with Greg Stott
In between Nic's two dates I'll be in Canberra on Friday 10 April to play at The National Press Club with Canberra guitarist Greg Stott and bassist James Luke.

Francesca Prihasti
I'll be helping stunning Indonesian-born pianist Francesca Prihasti launch her new album Night Trip on Tuesday 28 April at Foundry 616 for Jazzgroove. Vardanega and Groves will be on this one too, so this will be a tight gig. Francesca writes some of my favourite music to play.

DrumScene
Look out for the April edition of the magazine DrumScene as it's the 20th anniversary edition. Founder, editor and publisher Frank Corniola told me in a recent email that his staff insisted they interview him for this historic issue and that he agreed. I'm flattered that he also included my name in one of his answers regarding a list of great Australian drummers. Keep an eye out for that edition on the DrumScene website.
There are many more exciting projects being cooked up right now, and I'm looking forward to telling you about those in future editions. For now, thanks for reading and, as always, I'd love to hear from you, so please feel free to write to me here l and I'll get back to you as soon as I can.
Have a great month!